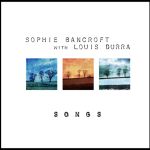 ‘Songs’ is available from the shop here (CDs or downloads) and from ITunes, Amazon and TheShop@BirnamCD

“Bancroft’s best album by some distance , her voice as beautifully recorded as I’ve heard it.” The Herald

“If Dolly Parton was from Scotland and sang jazz for a living then that’s exactly how Jolene would have sounded, but as we’re not living in an alternate reality we must console ourselves with the fact that someone has seen that dream all the way. Sophie Bancroft is the lady brave enough to take on that Dolly standard.” Roddy Hart, BBC Scotland

Bringing to mind Rickie Lee Jones, Norah Jones, and Suzanne Vega, ‘SONGS’ takes the listener on a journey that could be about a year in a life, or indeed a lifetime, with songs of love lost, found and long-term – intertwined with the spirit of Scotland’s natural beauty, an inspiration for much of Sophie’s writing. “I am thrilled to have my landscape photography on the CD cover. These images from my many walks, reflect the influence of the countryside on my song-writing.”

Listen to a couple of tracks from the new CD

With the help of Creative Scotland, Sophie brought together Louis Durra, Tom Lyne on bass and Stuart Brown on drums to record beautifully empathetic arrangements of Sophie’s repertoire.

Louis Durra on the SONGS CD:

“While arranging for SONGS, a few verses seamed to want different settings.  New chords began appearing, extra beats, other keys…  Sophie’s haunting, transparent songwriting made the ‘new camera angles’ possible.  The shifts highlighted the lyrics, not the music – or so it seemed to me…
The piano parts went a similar way while recording:  few recurring parts, more like different reactions to each verse.  I already knew what a reactive musician Sophie is, and she was fearless during sessions — jumping right into very different settings of her songs.  I felt it worked out very well.  lots of freedom for vocals and piano, the other instruments more grounded, everyone listening like mad — I think we really captured something, really did well by her music.
I was in a café in Berlin today — SONGS was playing.  It got me mulling over what we could record next! – It’s lovely hearing the album out in the world, hearing people’s reactions.  I really enjoyed bringing these versions of the songs to light. “

Sophie’s first collaboration with Louis Durra was for the ‘Made In Scotland Showcase’ in 2013 at The Edinburgh Fringe Festival. “Highly imaginative…inventive style…intriguing territory…One of the top 50 must-see shows in the Edinburgh Fringe Festival” The Scotsman. Louis, (based in LA at the time, now residing in Berlin) had come across Sophie’s music before performing at Fringe in 2011. Haunted by her music, Louis began playing her songs as jazz instrumentals. Meeting in 2012 during Louis’ second Fringe run led to performing together, and ‘SONGS’ is the result.

Sophie has a strong music pedigree; great-grandmother Rose Bancroft was a music-hall entertainer in the early 1900’s, parents who were semi-professional jazz musicians in their earlier years and brothers Tom and Phil Bancroft, innovative jazz musicians in the current scene. Sophie’s songs have been heard on the HBO hit TV series Six Feet Under, and award-winning vocalist Liane Carroll recently recorded ‘Calgary Bay’ with the Prague Philharmonic Orchestra on her CD ‘Ballads’. “…equally rewarding is her interpretation of Sophie Bancroft’s evocative Calgary Bay” – MOJO

2013: Collaborating with award-winning American jazz pianist Louis Durra and his trio, Sophie’s music was showcased during the high profile ‘Made In Scotland 2013’ week at the Edinburgh Fringe Festival.

LA-based Louis first came across Sophie’s music on her website whilst looking for accommodation advice from local musicians before performing at the Edinburgh Fringe in 2011 where he gained a ‘Herald Angel Award’.  He transcribed 2 of Sophie’s songs (Bird of Paradise and I Carried Your Heart) and started including them in his repertoire as jazz instrumentals.

Louis and Sophie met for the first time in 2012 during his second run at the Edinburgh Fringe, and vowed to work together in 2013. They plan to tour internationally following the premier of their collaborative work in August 2013.

The Made In Scotland Showcase 2013 has enabled these two exciting and thought-provoking musicians to come together.