2014: With the help of Creative Scotland, Sophie brought together Louis Durra, Tom Lyne on bass and Stuart Brown on drums to record beautifully empathetic arrangements of Sophie’s repertoire. ‘SONGS’, the seventh CD from singer-songwriter Sophie Bancroft, features songs new, old, borrowed and blue, encased in Louis Durra’s stunning arrangements.
‘Songs’ is available from the shop here (CDs or downloads) and from ITunes, Amazon and TheShop@BirnamCD

‘Songs’ was listed in the top 50 albums of 2015 by The Herald
“Nothing short of completely captivating.” David Kidman, FATEA online magazine
“Folk-inflected jazz with rootsy warm-heartedness. “ Scotsman Weekend Life Magazine
“Bancroft’s best album by some distance , her voice as beautifully recorded as I’ve heard it.” The Herald
“If Dolly Parton was from Scotland and sang jazz for a living then that’s exactly how Jolene would have sounded, but as we’re not living in an alternate reality we must console ourselves with the fact that someone has seen that dream all the way. Sophie Bancroft is the lady brave enough to take on that Dolly standard.” Roddy Hart, BBC Scotland

Louis Durra on the SONGS CD:
“While arranging for SONGS, a few verses seamed to want different settings.  New chords began appearing, extra beats, other keys…  Sophie’s haunting, transparent songwriting made the ‘new camera angles’ possible.  The shifts highlighted the lyrics, not the music – or so it seemed to me… The piano parts went a similar way while recording:  few recurring parts, more like different reactions to each verse.  I already knew what a reactive musician Sophie is, and she was fearless during sessions — jumping right into very different settings of her songs.  I felt it worked out very well.  lots of freedom for vocals and piano, the other instruments more grounded, everyone listening like mad — I think we really captured something, really did well by her music.  I was in a café in Berlin today — SONGS was playing.  It got me mulling over what we could record next! – It’s lovely hearing the album out in the world, hearing people’s reactions.  I really enjoyed bringing these versions of the songs to light. “

Sophie’s first collaboration with Louis Durra was for the ‘Made In Scotland Showcase’ in 2013 at The Edinburgh Fringe Festival. “Highly imaginative…inventive style…intriguing territory…One of the top 50 must-see shows in the Edinburgh Fringe Festival” The Scotsman. Louis, (based in LA at the time, now residing in Berlin) had come across Sophie’s music before performing at Fringe in 2011. Haunted by her music, Louis began playing her songs as jazz instrumentals. Meeting in 2012 during Louis’ second Fringe run led to performing together, and ‘SONGS’ is the result.

Liane Carroll, Sara Colman and Sophie Bancroft, three established singers and songwriters in their own right, draw on their deep friendship and history of collaboration spanning over a decade to present a very special live show Trio CCB:Unleashed.With a repertoire consisting of familiar jazz songs seamlessly blended with original tunes, their stunning musicianship, spontaneity and humour creates a captivating, emotionally charged and powerful yet intimate musical event.

Listen Here:
Far From Mars
I Scare Myself
One Note Samba

Review in reviewsphere – full review here
“The love in the room was tangible, the talent (singing and songwriting, musicianship and chest slapping!) top drawer and the sense of fun and playfulness infectious. But behind it all lay two qualities which elevate the great from the good: fearlessness and honesty. “

“In The presence of greatness tonight” Soundhouse Organisation

“Who put the riff in te-riff-ic? Liane Carroll, Sophie Bancroft and Sara Colman, whose gig at The Traverse was just that” – audience tweet

“You are all individually and together utterly amazing!”- audience tweet

“Totally inspiring to see real women at the top of their musical game and having great fun.”
★★★★ The Argus
“A glorious mix of styles, all accessible, impeccably performed and with superb harmonies dextrously performed by the three voices, with informality and a real sense of joy.”
Em Whitfield-Brooks – Programme Director Helmsley Arts Centre 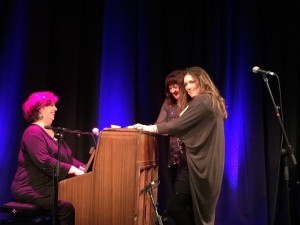 “We were delighted to host this superb concert last night, which our audience – comprising all ages – so enjoyed. The feedback was fantastic and the quality of the artists’ singing, along with their warmth and humour, was second to none. Their set was a glorious mix of styles, all accessible, impeccably performed and with superb harmonies dextrously performed by the three voices, with informality and a real sense of joy. The audience felt involved in something really special. These three are obviously real friends and this showed itself throughout the evening. This is a must for jazz and non-jazz fans alike; and to also have a workshop especially tailored for our local singers in the afternoon, who were then invited to perform in the evening, was an extra treat. It was a pleasure to welcome performers of such a high calibre to our small venue, and I cannot recommend this event highly enough.” Programme Manager @ Helmsley Arts Centre

ABOUT COLMAN, CARROLL AND BANCROFT

That the three have a deep friendship and history of collaboration spanning more than a decade, is evident in the unique sound that develops when they sing together and in the natural ease with which each individual or duo is showcased within a trio setting.

Over ten years ago, Liane, already with two Radio 2 Jazz award wins, and Sara, a finalist in the BBC Radio 2 ‘Sold on Song’ competition, became part of the vocal harmony group ‘The Passion’ with Jacqui Dankworth. The group had considerable success, recording an album ‘One Good Reason’ in 2007, featuring on Radio 4 ‘Woman’s Hour’ and appearing at The Royal Festival Hall. In 2011 their reunion gig at Pizza Express was recorded live for BBC3’s ‘Jazz Line-Up’.

When Liane became patron of the Fionna Duncan Vocal Jazz workshops around ten years ago, she met Sophie, one of the main tutors and part of one of Britain’s best known jazz families. Liane and Sophie made an immediate and lasting connection and the two continue to teach together after the FDJVW closed due to Fionna’s ill health.

Liane and Sophie teach together at the French Summer Jazz School and along with Sara, run vocal jazz workshops around the UK and Europe.

Whilst putting together compositional ideas and arrangements for various tutor performances, the idea for Colman, Carroll and Bancroft: Unleashed was born. The depth of understanding and familiarity between the three performers creates an environment in which stunning musicianship, spontaneity and humour comfortably combine to produce a captivating, emotionally charged and powerful yet intimate musical event.

‘Refreshing and utterly magical’ The Herald on Sophie Bancroft

‘A naturally soulful and emotionally true voice, connecting you and drawing you in’ Ian Shaw on Sara Colman